This is only September but …
Postcard Christmas snow burdens the branches 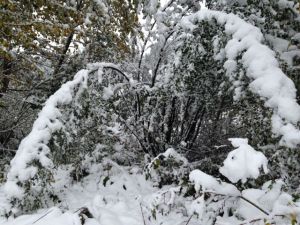 pristine heaviness
Silence of snow
insulates the earth,
muffles the birds
Invites me
to withdraw from the world
As outside it piles heavy on unprepared trees
Branches about to break,
Like humans under the weight of worry.
Be a snow-shaker, when you can …

Crazy … Sunday I was picnicking with friends in 25 degree weather, and
Monday morning it snowed, and snowed for three days and three nights … the branches sagged till they met earth.
Tuesday on my walk I delighted to see the branches spring back with a light shaking … it was kind of fun. That evening Mayor Nenshi of Calgary was on the news asking people to give branches a gentle shake, to reduce the burden on the trees. Trees full of leaves, each catching more snow to add to the weight.
Wednesday Armed with a three-prong rake I went out, hooked higher branches, shook and released. This was play in the snow for me. This also became my version of the current ice-bucket challenge as heaps of snow dumped on me as I moved from tree to tree. Satisfaction as the branches lifted off the ground, back into the air. It struck me how helpless the branches were, totally dependant on someone to relieve them in this dilemma.
Thursday I met a new neighbour, who had witnessed my snow fun, she had also tried some shaking.
By Friday, most of the snow had melted and I wondered if it had made any significant difference-even though I saw an immediate change-but maybe they wouldn’t have broken, and maybe it would all have been okay, and maybe I did prevent a few broken limbs … and maybe it does not matter if I know. All appeared back to normal.

In my life I have had both snow shakers, 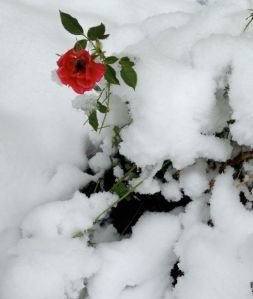 and ice breakers, people that chipped away the cold, shook me out of the doldrums and lifted the spirits. I am eternally grateful for those people.
And now I have the privilege to play it forward, for others weighed down.

Worry weighs us down, a cheerful word picks us up. Prov 12:28 The Message

An anxious heart weighs a man(woman too) down, but a kind word cheers him(her) up. NIV